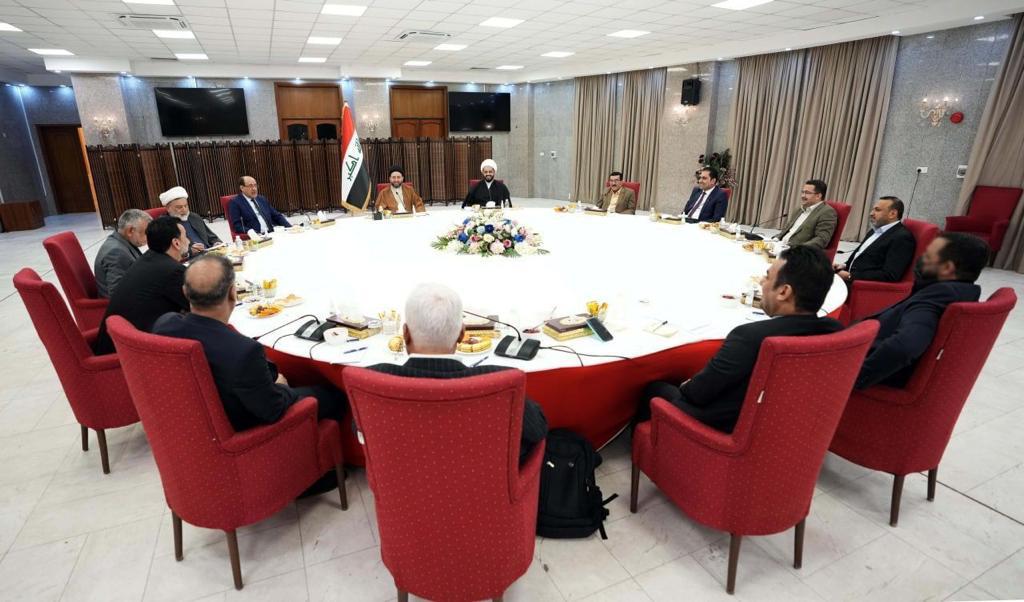 Shafaq News/ The Shiite Coordination Framework (CF) and its allies would meet with Parliament Speaker Muhammad al-Halbousi to discuss the new deputies instead of the Sadrist representatives.

A CF source told Shafaq News Agency, "Sayyid Muqtada al-Sadr, announced that he would not change his decision to withdraw from the political process. Therefore, a new reality is now created for all forces."

"The Framework and its allies, the Patriotic Union of Kurdistan, the Azm Alliance (led by Muthanna Al-Samerrai), and some independents, will hold a meeting in the coming days with Parliament Speaker to set a date to take the oath."

The source explained that "preliminary information indicates that the 73 parliamentary seats of Al-Sadr's deputies will be distributed as follows: The State of Law Coalition (led by Nuri Al-Maliki) will have 40-41 deputies, the Al-Fateh Alliance (Led by Had Al-Ameri), 44 deputies, the State Forces Alliance (led by Ammar Al-Hakim and Haidar Al-Abadi) will get 15 deputies, and the Imtidad Movement (independents), 17 deputies."

According to Iraqi laws, if any seat in Parliament becomes vacant, the candidate who obtains the second-highest number of votes in their electoral district would replace them.

All but Imtidad Movement are parts of the Framework.

According to our source, the Framework will begin next week with new rounds of meetings with all forces, including the Al-Siyada, and the Kurdistan Democratic Party, to reach understandings that lead to "a strong government."

Concerning the candidates for Prime Minister, the source pointed out that the Pro-Iranian group has some candidates. Still, "if everyone agrees to choose Mustafa Al-Kadhimi for another term, it might be accepted."

"Despite al-Sadr's withdrawal from the political process, the Framework would ask him about his candidate for prime minister."

Yesterday, the leader of the Sadrist movement, Muqtada al-Sadr, held a closed meeting with the Sadrist bloc's MPs, who recently resigned from Parliament.

The source told our Agency that the Sadrist leader confirmed to his party's representatives that the resignation decision would not be reversed.

After the resignation of the largest bloc in the Parliament, the Sadrist, several scenarios face Iraq, and the country would be mired in political instability.

Five pollical initiatives have been launched so far from different parties.

The last is from the Iraqi President, Barham Salih.

A source close to the President said that Salih started working on the initiative shortly after al-Sadr decided to pull out of the political process, pointing out that the President received positive signs from the political parties, especially the Coordination Framework.

He added that the initiative aims to make al-Sadr reverse his decision which can seriously affect the country, noting that no government can succeed without Sadrist blessing and support.

Now, many challenges face the initiatives to overcome the long political deadlock; the first challenge is a three-times fail in choosing the new Iraqi President due to the differences between the two Kurdish poles; the Kurdistan Democratic Party says the position of the President of the Republic is a "Kurdish entitlement, and not for a specific party." and, the Patriotic Union of Kurdistan asserts that this position is its right.

The second challenge is forming a new government and Prime Minister, and the third is the political situation and new alliances with Al-Sadr's withdrawal.

Another challenge may disturb and complicate the scene, the stalemate and tension that could boil over and lead to street protests by supporters of al-Sadr, turning into violence.

The Sadrist, CF call their supporters to demonstrate today