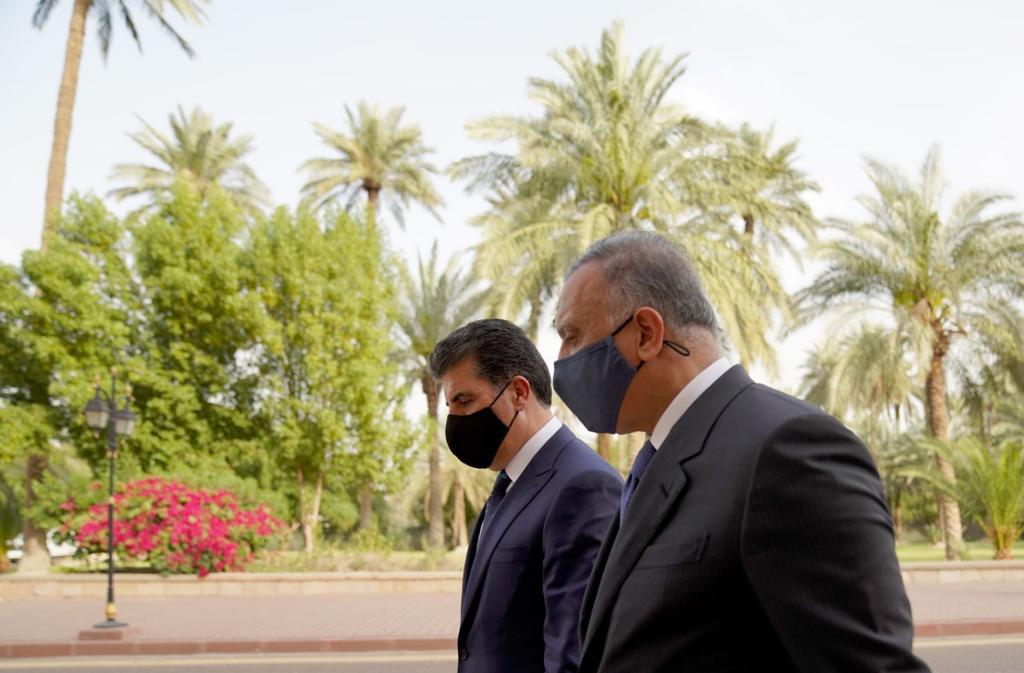 Shafaq News/ The President of Kurdistan Region, Nechirvan Barzani، expressed on Saturday the region’s readiness to settle all the differences with the federal government on the basis of the constitution and within the framework of the federal system, deeming this step as crucial to "security and stability in Iraq".

A statement by the region's presidency received by Shafaq News Agency stated that the region’s president met this Saturday afternoon in Baghdad with the Iraqi Prime Minister, Mustafa al-Kadhimi, indicating that the two sides discussed cooperation and coordination between the institutions of the federal government and the Kurdistan Regional Government within the framework of the constitution and steps to confront terrorism and crime, among other economic, health, and security issues.

The statement added that al-Kadhimi emphasized bolstering security cooperation between Baghdad and Erbil to secure internal stability and prevent any security gaps that might be exploited by terrorism or crime.

According to the statement, Al-Kadhimi reiterated that Barzani's frequent visits to Baghdad send "correct messages" to all Iraqis, stressing that it promotes confidence, exhibits goodwill, and encourages cooperation and coordination in all areas for the sake of the country's interests.

Al-Kadhimi added that he will visit Kurdistan Region in the near future.

For his part, Barzani expressed his pleasure to visit Baghdad and praised the political, diplomatic, and economic efforts of al-Kadhimi, asserting that the previous Iraqi diplomatic efforts and the visits and meetings carried out by the Prime Minister disclosed the position of Iraq and its regional and international role.

The President of the Kurdistan Region highlighted the commitment to developing solutions to internal problems and raising the level of security cooperation, expressing his support for the federal government and strengthening the state's prestige in a way that enables it to face challenges.

The statement pointed out that the two sides discussed the current situation in Iraq, relations between the regional and the federal government, the recent visit of Barzani to France, developments of the Coronavirus pandemic and its effects, the vaccination rollouts, the threats of terrorism, the tasks of the Global Coalition in Iraq, and the Iraqi elections.