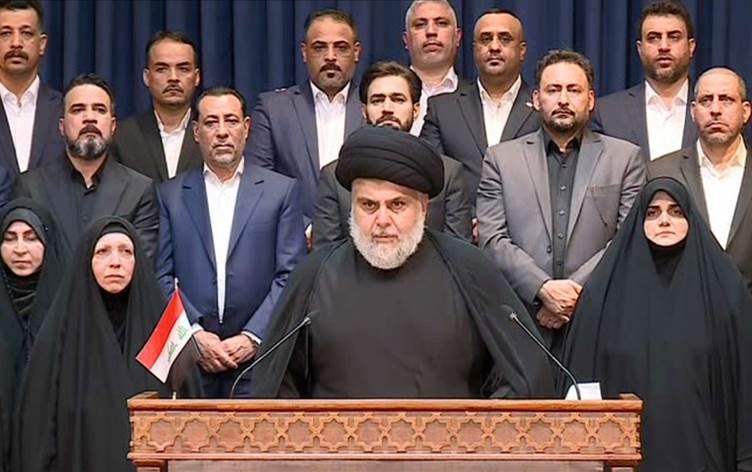 Shafaq News/ The leader of the Sadrist movement, Muqtada al-Sadr, dropped on Sunday a hint about his vision to the lineup in the Iraqi political arena.

In a tweet he shared earlier today, the Populist Shiite Cleric said that the Parliament shall have two "orientations", "a loyalist party, that forms a government and takes upon itself the reforms at all levels."

The second party, according to al-Sadr, is "the opposition, whose consensus is compelling to the first without marginalization."

A source from inside the Sadrist movement lambasted the approach that some Iraqi forces pursue to shuffle the cards and earn a position in the cabinet lineup, stressing that the movement has changed its mindset and it will "not share the power this time."

The source said in a statement to Shafaq News Agency, "the political forces that lost in the recent parliamentary election are trying to impede al-Sadr and prevent him from forming the government in every way possible. The first of which is to demand a manual recount of the ballots to all the Electronic Voting Machines [EVMs]."

"If those demands were met, regardless of being illegal, a manual recount will take eight months. It is sufficient time to devise a well-plotted scenario that reshuffles the cards."

For his part, the former MP and the leading figure in the Sadrist movement, Riyad al-Masoudi, said that conducting a manual recount of all the EVMs in the country requires legislation.

"The endorsement of all the defeated parties to this choice is a political issue," he said.

"Article 76 of the Constitution stipulates that the President of the Republic assigns the largest bloc to form the government (the Sadrist movement). The Prime Minister, according to the components equation, shall be a Shiite. i.e. a Sadrist."

"The Sadrist movement has a new political vision. It is different from the former one that relies on quota and sharing the power with parties it does not agree with."

"The political forces that did not win enough seats wish to participate in the government regardless of the number of seats they won. This means that they do not believe that there is a new political map after each election. Hence, the reasons for some parties' insistence upon holding a manual recount became clear."

Al-Sadr, a controversial leader remembered for leading an insurgency against U.S. forces after the 2003 invasion, appeared to have increased his movement's seats in the 329-member parliament from 54 in 2018 to  73.

Al-Sadr's proposal is consistent with the reform paper, the Ministry of Finance says