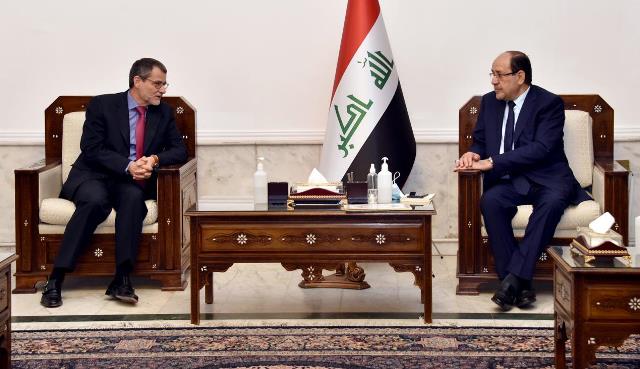 Shafaq News / The head of the State of Law Coalition, Nouri al-Maliki, expressed his readiness to support dialogue between political forces, calling on the European Union to communicate Iraq's vision about conflicts in the region.

Al-Maliki's office said in a statement that the latter received in his office, the European Union Ambassador to Iraq, Martin Huth, indicating that during the meeting, various issues related to cooperation and partnership between Iraq and the EU were discussed, as well as the role of Iraq to reduce tension in the region.

Al-Maliki stressed the need for the European Union to take its role in communicating Iraq's vision of distancing itself from the conflict of wills in the region, explaining that Iraq is preparing to run early elections that express the will of the Iraqis and enable them to choose their representatives freely.

In his turn, Huth expressed the willingness of the European Union mission to Iraq to support transparency for the upcoming electoral process, indicating that they stand with Iraq to achieve development and stability.