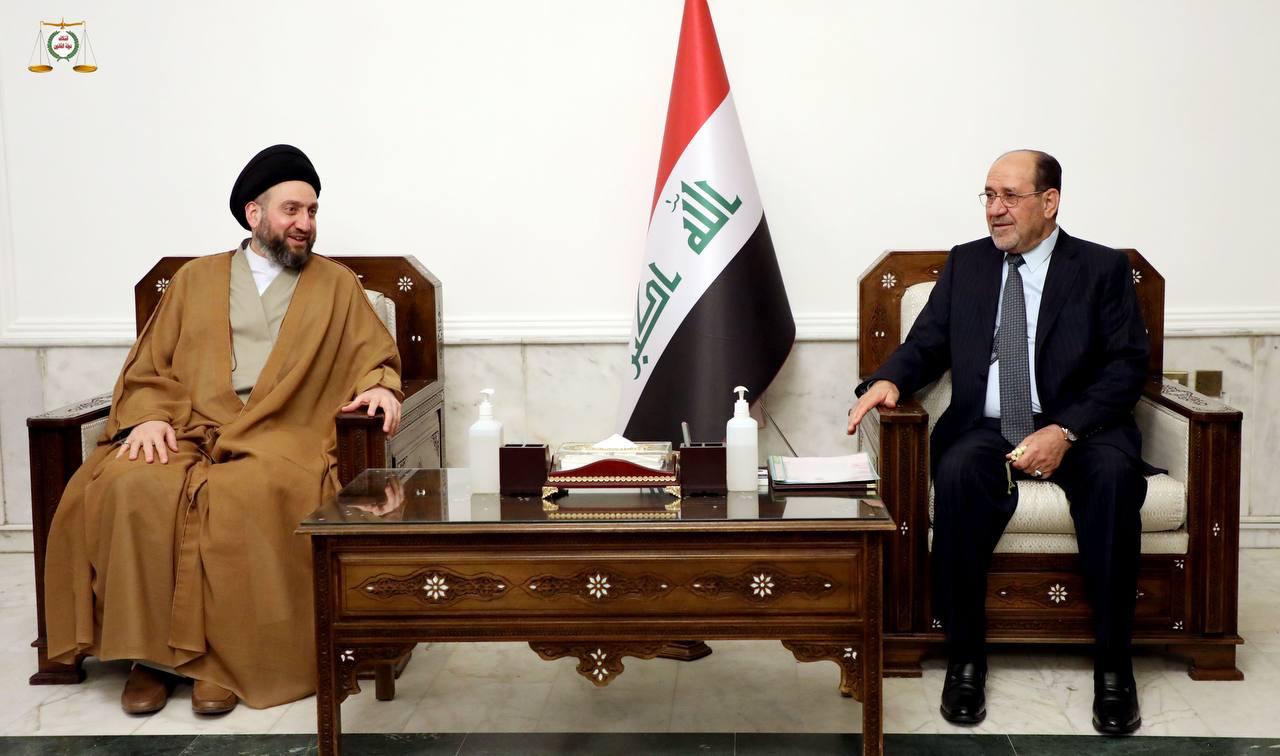 Shafaq News/ The Secretary-General of the Islamic Dawa Party, Nuri al-Maliki, and head of the Al-Hikma Movement, Ammar al-Hakim, stressed the importance of forming a government of "national balance."

Al-Maliki's media office said that "Al-Maliki received today in his office Al-Hakim and his accompanying delegation, and discussed the political situation and the ongoing dialogues of the political forces."

The two sides stressed "the importance of finding a way out of the current political crisis and forming a government that achieves national balance and preserves the rights of the largest component (the Shiite) and the rest of the social components to participate in the process of taking responsibility for building the country and preserving its stability."

Yesterday, the Asa'ib Ahl al-Haq movement leader, Qais al-Khazali, and the head of the al-Hikmah movement discussed ways to preserve the rights of the "largest community."

According to a statement by al-Khazali's office, the two sides stressed the need to reach an understanding and emphasized the importance of putting all efforts into resolving the current impasse.

The Framework is pursuing a multi-pronged approach to resolve the deadlock that has kept the country mired in political paralysis since October 10. A source from inside the Shiite forces consortium said on Sunday.

The Coordination Framework, the source said, has appealed to the Kurdistan Democratic Party (KDP) and the Patriotic Union of Kurdistan (PUK) to find common ground and agree upon a consensus government apart from their current candidates.

"The Framework is adamant about reuniting the Shiite home. It will never give up on the Sadrist movement. However, if the latter remains resolute about the authoritarian government, the former will proceed with forming a government and naming a premier."

On Thursday, the influential Iraqi Shiite cleric said that he was stepping back for the next 40 days and giving his Shiite rivals the chance to form the country's next government.

The surprising move by Muqtada al-Sadr comes against the backdrop of a persisting political deadlock in Iraq five months after the general elections.

Al-Sadr's offer came in a tweet. He also called on his followers not to interfere "neither positively nor negatively" as his rivals from the Coordination Framework, a coalition of Iran-backed Shiite parties, try cobble together a Cabinet.