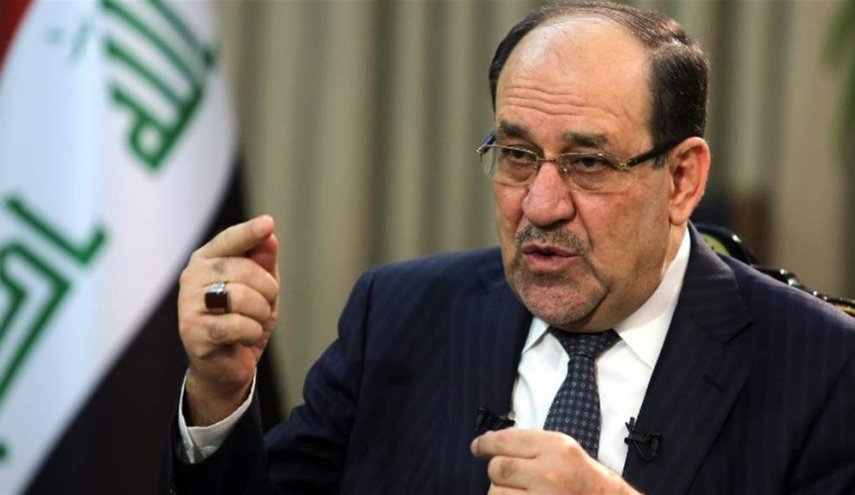 Shafaq News / Nouri al-Maliki, the leader of the State of Law Coalition, accused on Sunday some parties he did not name of trying to drag al-Hashd al-Shaabi (Popular Mobilization Forces-PMF) into clashes with the Armed Forces following the unrest caused by the arrest of the Operations commander of the PMF in al-Anbar, Qassem Musleh.

Al-Maliki tweeted today, "Today, some attempted, and failed, to drag the PMF into clashes with the Armed Forces because these heroic fighters have dedicated their blood to the liberation of the land and its people, according to the law."

He added, "Our Armed Forces should beware of stirrers of sedition and intrigue, and remain a unified front with the PMF, just as they have always been on the battlefield."

Tensions mounted in Iraq's capital after the arrest of PMF's Operations commander in al-Anbar on terrorism charges, prompting a dangerous showdown by the detainee's paramilitary supporters and the Iraqi government.

The confrontation began on Wednesday after Iraqi security forces arrested at dawn Qassim Mahmoud Musleh pursuant to a judicial investigation and arrest warrant over terrorism charges, Iraq's military said in a statement. The statement said he was being questioned by a joint investigative committee.

Tensions reached a fever pitch when Iraqi security forces and the elite Counter-Terrorism Service were deployed to protect the government and diplomatic missions, sparking fears of violence. Some armed PMF factions gathered around the Green Zone's entrance gates.

The presence of the PMF inside the seat of Iraq's government was considered by some senior Iraqi government officials as a way to pressure al-Kadhimi to release Musleh.

The prime minister described the show of force as “a serious violation of the Iraqi constitution and the laws in force," adding in a statement, “we have directed an immediate investigation into these movements.”

Al-Kadhimi later held a meeting with senior Shiite political leaders who hold away over the PMF. The premier also ordered the formation of an investigative committee comprised of intelligence from both defense and interior ministries and the PMF security and National Security.