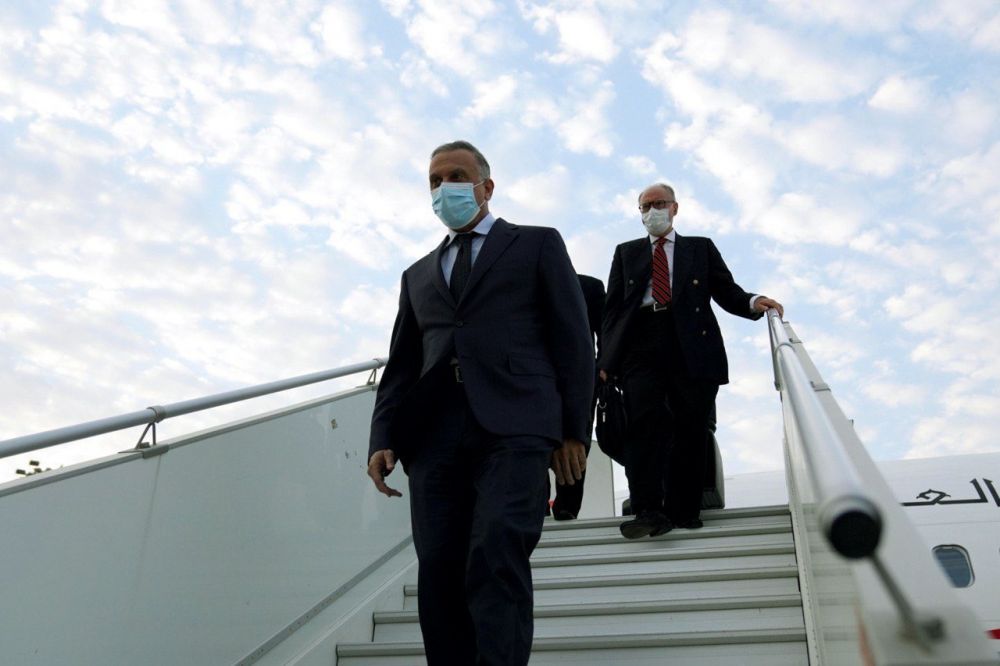 Shafaq News/ Iraqi Prime Minister Mustafa al-Kadhimi will meet with US President Joe Biden on Monday (Jul 26) to discuss a possible full US troop withdrawal from his country.

The White House talks between the two allies come just a week after a deadly attack claimed by the Islamic State group, despite Baghdad declaring the Sunni extremists defeated over three years ago.

Kadhimi finds himself backed into a corner by the influence of Iraq's other main ally - neighbouring Iran, which has long seen the United States as its arch-nemesis.

Despite shared enmity on the part of the US and Shiite Iran toward a resilient Islamic State, Kadhimi is under intense pressure from pro-Tehran armed factions who demand the withdrawal of 2,500 US troops still deployed in Iraq.

Operating under the Hashed al-Shaabi, a paramilitary network whose tentacles extend deep into the state, these Shiite factions stand accused of carrying out around 50 rocket and drone attacks this year against US interests in Iraq.

"If there is no significant announcement on the withdrawal of troops, I fear that the pro-Iran groups may ... increase attacks on the US forces," Iraqi researcher Sajad Jiyad told AFP.

Such concerns are given weight by the leader of one such paramilitary group Asaib Ahl al-Haq, who recently warned that "resistance operations will continue until all American forces have left Iraqi territory".

Most of the US soldiers, deployed in 2014 to lead an international military coalition against Islamic State, left under Biden's predecessor Donald Trump, who hosted Kadhimi at the White House last August.

The troops that remain are officially classed as advisers and trainers for Iraq's army and counter-terrorism units.

Iraqi Foreign Minister Fuad Hussein, already in Washington for several days, has assured Iraqi media that "the talks will successfully establish a timetable for the withdrawal of American forces".

But US media outlets have only pointed to a "redefinition" of the troops' mission.

Ramzy Mardini, an Iraq specialist at the University of Chicago's Pearson Institute, believes there will be no "radical change" in the US position.

The Biden-Kadhimi meeting may cosmetically be "shaped" to help the Iraqi premier alleviate domestic pressures, "but the reality on the ground will reflect the status quo and an enduring US presence," he said.

Mardini points to "political costs" for Biden were he to authorise a full withdrawal of US troops, stemming from the catastrophic "legacy" of the 2011 withdrawal, which created a vacuum exploited by Islamic State during their lightning 2014 offensive.

It took a three-year military onslaught, heavily supported by a US-led coalition at the invitation of Iraq, to wrest back all the urban centres the Sunni jihadists seized.

"The last thing that the US would want would be to quit Iraq and find themselves a few years later facing ... a return by IS," according to one diplomatic source.

Islamic State today operates from mountainous and desert regions, activating cells for attacks including Monday's suicide bombing of a market in Baghdad's Shiite district of Sadr City that officially killed 30.

Beyond the ever-present security issues, Kadhimi, in power for little over a year, is grappling with a cocktail of other crises three months ahead of a general election that threatens his tenure.

Kadhimi will therefore also seek to secure a softening of secondary US sanctions relating to Iran when in Washington, to help Iraq honour crucial transactions with its neighbour and tackle the power crisis, according to Jiyad.

Shortages during the stifling summer heat have been exacerbated by Iran suspending crucial gas deliveries in recent weeks, due to payment arrears of US$6 billion that Baghdad is unable to settle, in part because of US sanctions on Tehran.

"The prime minister's visit (to Washington) is inextricably tied with his electoral campaign," according to Mardini.

"It's part of an effort to shore up international and regional support" to help him revive a faltering domestic political base, he added.