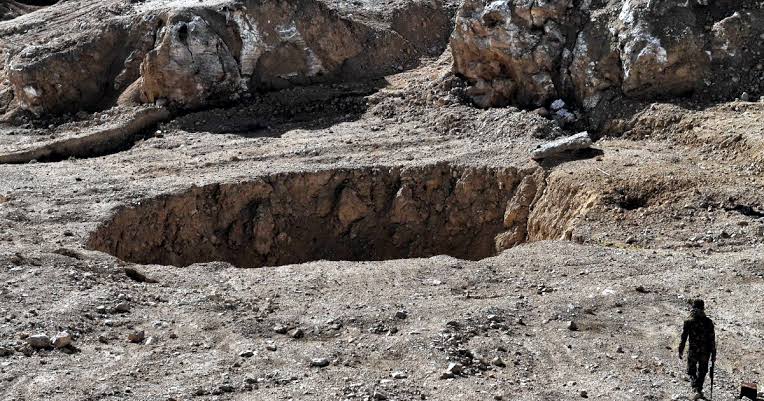 Shafaq News/ Iraq's parliament speaker Mohammad al-Halboosi on Saturday instructed the competent authorities to submit a report with the requirements to proceed with unearthing what may be the world's largest mass grave in Nineveh, northern Iraq.

Believed to contain roughly 4,000 bodies, al-Khasfa sinkhole is yet to be unearthed, albeit it was discovered in 2017.

The bodies mainly belong to victims of the hardline Sunni group, ISIS, that between June and December 2014, overran large swathes of northern and western Iraq and declared it part of their so-called caliphate.

According to a readout issued by his bureau, al-Halboosi "attended a meeting held by the Committee of Martyrs, Victims, and Political Prisoners with the Department for the Protection of Mass Graves Affairs at the Martyrs Foundation to devise an action plan to open (Al-Khasfa) mass grave in the Nineveh Governorate."

‏During the meeting, al-Halboosi was given a detailed insight into the logistic and technical preparations required to proceed with unearthing the mass grave and the challenges that might impede the process.

‏Al-Halboosi instructed the relevant authorities to submit reports on their needs and requirements within a week and assigned the Martyrs and Victims Committee to the duties of supervising the work and coordinating with government and non-government relevant bodies.