Al-Azm: we stand at the same distance from everyone, support entitlement-based governance 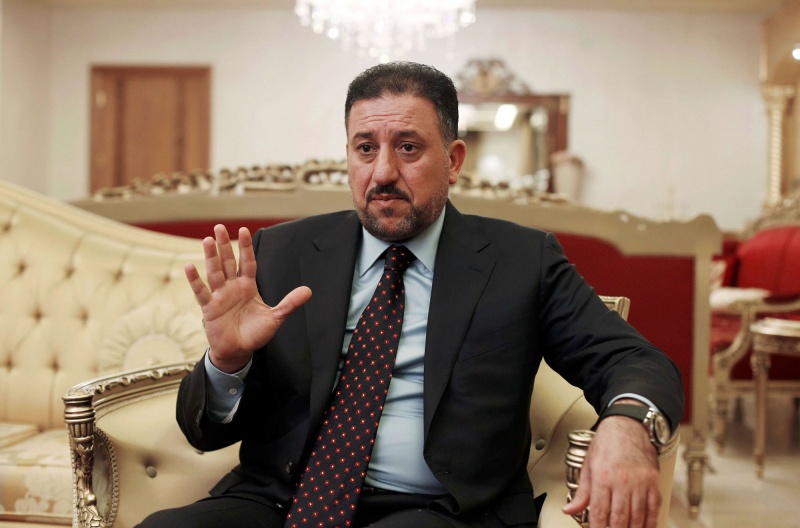 Shafaq News/ Spokesperson to al-Azm alliance, Ahmed al-Jubouri, said that his bloc stands at the same distance from all the parties and endorses entitlement-based governance.

The leading figure of Khamis al-Khanjar's Sunni bloc, Ahmed al-Jubouri, said on Thursday, "al-Azm is close to everyone, does not tolerate marginalizing any party in the political process, and has no red flags on anyone. We are working to converge the views between all the political blocs."

"So far, nobody has been nominated for the three top positions," he said, "we uphold building the state according to the political entitlement of every party."

A-Azm alliance and four other blocs who secured seats in the upcoming parliamentary lineup combined to form a common bloc, spokesperson to the new coalition said on Thursday.

The newly formed coalition encompasses winning candidates from al-Azm, Determination (Hasm) for Reform, the Masses (al-Jamaheer) bloc, the Arab alliance of Kirkuk, and members of the National Contract (al-Aqd al-Watani).

The leading figure of al-Azm alliance, Salem al-Issawi, said in a press conference held in the Iraqi capital, Baghdad, that the coalition representing the Sunni territories in Iraq includes 34 winning candidates.

"The coalition seeks to establish a true participation in running the authority and the state, reconsider the policies that dedicated the political, security, and economic monopoly and the consequent crises and problems."

Al-Issawi said that the new coalition has chosen the leader of al-Azm, Khamis al-Khanjar, to run the negotiations on behalf of its members regarding the making agreements and alliances, naming the three heads of the state, and choosing the members of the upcoming government.

Spokesperson to the Sunni al-Takaddom (Progress) party, Yehya al-Muhammadi, extended congratulations to the members of the new Sunni alliance formed under the umbrella of Khamis al-Khanjar's al-Azm alliance.

In a statement to Shafaq News Agency earlier today, Thursday, al-Muhammadi said, "we followed in al-Takaddom the formation of the new alliance. As we congratulate them, we hope that it achieves the aspirations and interests of the people."

Al-Muhammadi continued, "may the formation of this alliance promotes stability instead of strain and crises and contributes to finalizing the preparations for the election entitlements."