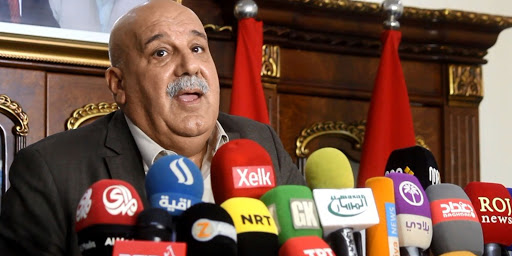 Shafaq News / The Secretary-General of the Ministry of Peshmerga, Lieutenant General Jabar Yawar, announced on Tuesday that a delegation from the ministry will visit Baghdad soon to reach a final agreement with the Iraqi Ministry of Defense regarding the joint redeployment in the disputed areas between Erbil and Baghdad.

Yawar said in a statement to reporters today that the Ministry of Peshmerga and the Ministry of Defense will hold a meeting soon to reach a final agreement regarding the joint redeployment in the disputed areas.

He added, "In general, we are holding meetings and discussions. There will be another meeting soon for the two coordination committees between the Ministry of Peshmerga and the Iraqi Ministry of Defense".

"The two sides have one opinion regarding the existence of close coordination between the Peshmerga forces and the Iraqi army to eliminate ISIS, especially in Diyala, Tuz Khurmatu, Kirkuk, Makhmour and Mosul", he said, "But this matter requires a mechanism between the two parties".

Baghdad imposes a new restriction to curb the assassination operations